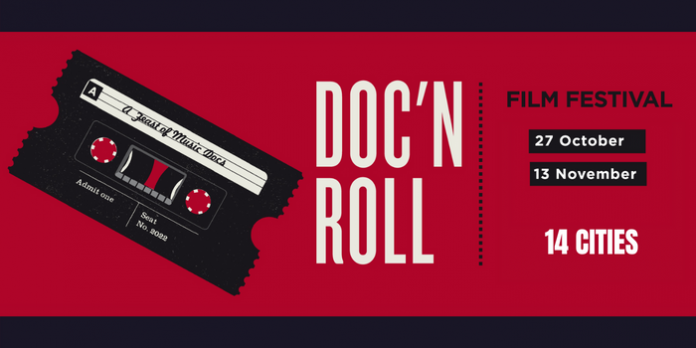 This year Doc’n Roll will screen a hand-picked selection of 21 feature-length documentaries and 9 shorts from around the globe, with both in-cinema and online offerings, and multiple world, European, UK and London premieres of highly anticipated films.

FROM ELECTRONIC TO SOUL & PSYCH TO JAZZ

A programme of musical discovery highlighting major artists and unsung heroes, cult icons and underground subcultures, Doc’n Roll puts a dazzling range of rhythms, musicians and music scenes in the spotlight, and showcases stories from the worlds of electronic, folk and punk to the landscapes of soul, psychedelia and jazz.

The theme of change is at the heart of this year’s lineup, from the personal impact of health conditions to the positive influence of creative communities as they respond to social and political change, and music’s ability to inspire and empower in the fight against injustice. This year's programme aims, say Doc’n Roll’s founders, to help us navigate a world full of constant upheaval and change.

Opening Doc’n Roll Festival 2022 on Thursday 27 October is A FILM ABOUT STUDIO ELECTROPHONIQUE, filmmaker James Taylor’s new documentary focusing on Sheffield’s golden era of pop and the council-estate semi where the first recordings by bands that became The Human League, ABC, Heaven 17, Def Leppard, Clock DVA and Pulp were made.

Further highlights for 2022 include three world premieres, including the rediscovery of a uniquely charismatic 70s soul singer in LEE FIELDS: FAITHFUL MAN, and a portrait of the enigmatic frontman of the legendary German krautrock band CAN as he faces the challenges of cancer and a never-ending global tour in ENERGY: A DOCUMENTARY ABOUT DAMO SUZUKI.

Also seeing its world premiere at Doc'n Roll 2022 is TRIP: A JOURNEY INTO THE WORLD OF PSYCHEDELIC SIGHT & SOUND, Lilly Creightmore’s intimate portrait of the artists old and new playing roles in the resurgence of psychedelic-inspired sound, from psych-rock pioneer Roky Erickson to The Black Angels, The Brian Jonestown Massacre, Sonic Boom of Spacemen 3 and many more.

Music scenes that emerged from the cultural climates of specific places and times will also be in the spotlight.

The Super-8-shot THIS IS NATIONAL WAKE tells the compelling story of a courageous apartheid-era South African trio that formed when it was illegal for these young musicians to play or live together.

GOD SAID GIVE ’EM DRUM MACHINES: DETROIT TECHNO profiles the Black creators and beating Motor City heart of a world-changing genre. TRAMPS! THE DEATH OF PUNK, THE NEW ROMANTICS, THE ART OF SURVIVAL is a celebration of the queer, radical roots of London’s New Romantic visual art, fashion and music scene in the wake of punk.

Meanwhile, we have the world premiere of MUSIC IS MY BOYFRIEND: a love letter to The Hidden Cameras and a time capsule of Toronto’s raucous queer underground scene in the early days of the 21st century.

Blues and jazz legends are also in the spotlight this year. REWIND AND PLAY: THELONIOUS MONK centres on an infamous 1969 French TV interview, where the jazz giant takes down an arrogant journalist. HARGROVE chronicles the final year of restlessly innovative jazz trumpeter Roy Hargrove’s life.

An acclaimed, Grammy-winning Cuban jazz pianist is the subject of OMAR SOSA’S 88 WELL-TUNED DRUMS, and we follow the creative journey of a Mississippi-to-Chicago blues legend in BONNIE BLUE: JAMES COTTON’S LIFE IN THE BLUES, about the Mississippi blues legend.

CITY OF A MILLION DREAMS: PARADING FOR THE DEAD IN NEW ORLEANS offers a vivid, fascinating portrait of the extraordinary jazz funeral traditions of the Crescent City, while GETTING IT BACK: THE STORY OF CYMANDE tells the long-overdue story of some unsung British heroes. Long after Cymande stopped playing, their innovative Seventies jazz-rock-funk played on, sampled by De La Soul, Wu-Tang Clan, the Fugees and more.

This year Doc’n Roll is pleased to present the eagerly awaited doc WHAT YOU COULD NOT VISUALISE, an intimate portrait of 4AD post-punk band Rema-Rema by filmmaker Marco Porsia, director of the acclaimed Swans – Where Does A Body End.

In MOONBATHING IN FEBRUARY: FAT WHITE FAMILY, the artists themselves tell the story. This defiantly lo-fi DIY film by the band’s Lias Saoudi captures what he calls the “throwing shit at the wall until something sticks” stage of the album-making process.

True Manc grit: THE PICCADILLY RATS: LIVE IN MODERATION pays hilarious and heartbreaking tribute to Manchester’s most famous buskers. AGE OF RAGE: THE AUSTRALIAN PUNK REVOLUTION is a tribute to fast and furious rebellion Down Under back in the day... and its surprisingly long afterlife.

HEAVEN STOOD STILL: THE INCARNATIONS OF WILLY DEVILLE is a portrait of the eventful life and charismatic work of an elusive CBGBs house-band member and songwriter who went on to become the flag-bearer for American roots music in Europe, gaining plaudits from Ben E. King and Bob Dylan along the way.

Elvis is everywhere... and if that line rings any bells, you won't want to miss THE MOJO MANIFESTO: THE LIFE AND TIMES OF MOJO NIXON, the tale of Neill Kirby McMillan Jr., who grew up listening to his dad’s soul 45s and plotting his escape from conservative small-town America – by becoming a blues-inspired musician playing psychobilly. This is his story.