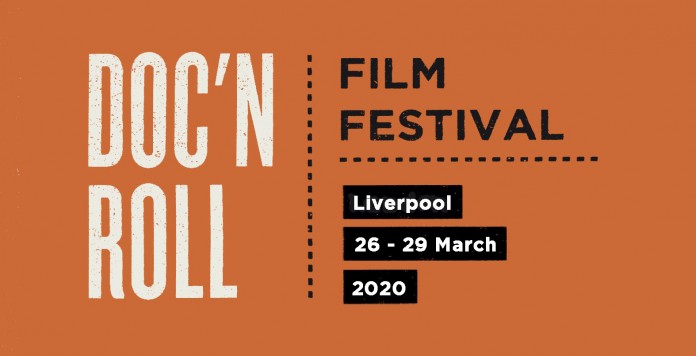 Doc’n Roll, the UK’s Music Documentary Festival, returns to the Mersey for its biggest and best event yet: the 5th Liverpool edition, which runs from from 26th to 29th March 2020 at Picturehouse at FACT and The British Music Experience (BME).

From Zambian rock to MySpace-spawned waves of electronic creativity, Doc'n Roll Liverpool 2020’s five acclaimed full-length features each spotlight a unique musical landscape. Witness the births of movements both musical (Drum & Bass and the offbeat Synthwave) and political (Rock Against Racism), get under the skin of Sixties folk-rock legend David Crosby and watch a forgotten African icon gain a new following, years and thousands of miles from where he began.

Once again this year, Doc’n Roll Liverpool aims to dazzle music lovers, entertain documentary devotees and break down boundaries as it celebrates the places, eras and unique creative talents that gave rise to innovative and influential genres.

Doc’n Roll is supported by the BFI using funds from the National Lottery to grow audience appetite and enjoyment for a wide range of independent British and international films. Launched in 2014 by founder Colm Forde, its mission is to show long-overdue love to the many under-the-radar music docs that risk-averse film programmers tend to ignore.

Forde says: “I’m delighted to present our film programme for the 5th Liverpool edition of Doc’n Roll. Focusing on musical outliers, this year’s selection of films, including works by first-time directors, is a testament to the power of music as a universal language of hope and inclusion.”

From the days of illegal raves to the dark club sounds of Optical and Ed Rush, THE REST IS HISTORY is an insightful look back at the early years of jungle and drum & bass music, its development, and the culture that surrounded it. Via interviews with many of the genres’ pioneers, including Micky Finn, Ray Keith, Dillinja, Ragga Twins, Paul Ibiza and G.Q, viewers are offered an unprecedentedly intimate look at the creation of this influential underground art form.

Protest at its most powerful and musical, Rock Against Racism (RAR) was formed in 1976 by activists and musicians spurred into action by “music’s biggest colonialist” Eric Clapton and his support of racist MP Enoch Powell.

Expanding on her 2017 short film on the subject, Rubika Shah’s intense, intelligent and vivid feature charts a vital protest movement that was born in London but whose impact would be felt across the country. WHITE RIOT blends fresh interviews with raw (and frequently disturbing) archive footage to recreate the hostile environment of four decades ago, full of anti-immigrant hysteria and National Front marches. As neo-Nazis recruited the nation’s youth, RAR’s multicultural punk and reggae gigs provided rallying points for collective action and resistance. As RAR founder Red Saunders says of its impact: “We peeled away the Union Jack to reveal the swastika.”

Shah, a Screen International Star of Tomorrow, charts the campaign’s growth from its Hoxton fanzine roots to 1978’s huge anti-fascist carnival in Victoria Park, featuring X-Ray Spex, Steel Pulse and of course The Clash, whose rock-star charisma and gale-force conviction took RAR’s message to the masses.

A fascinating cinematic journey that follows the genesis and 21st-century reformation of WITCH (We Intend To Cause Havoc), Zambia’s most popular rock band of the 1970s, along with documenting the life of the band’s lead singer, Jagari, whose name is an Africanisation of Mick Jagger.

In exploring a music that was forgotten by many and unheard by most, this documentary turns an insightful eye on a former African rock star and the excitement around the rediscovery of his music by Western fans, many of whom had not been born when he last released an album.

In the mid 2000's and with the help of MySpace, several composers from different countries spontaneously started an underground music scene that the Internet would call, among other names, Synthwave. It is defined as electronic music strongly inspired by the music, soundtracks, and pop culture of the 80s. These composers, whose music who had reached millions, all remained anonymous, until now.
Narrated by iconic director John Carpenter, The Rise Of The Synths is a journey back and forth in time, from the roots of this scene to its impact on today's pop culture. So what is Synthwave? An irresistible blend of nostalgia and music; of creative processes and cultural references; of re-appropriation and legitimate creation. Is a random revival or an emerging cultural phenomenon?

A triumph at Sundance, this inspired collaboration between director A.J. Eaton and producer Cameron Crowe coaxes David Crosby into candour as the singer-songwriter confronts mortality and assesses the toll taken on him and those around him by the life he led in his earlier years. Unflinchingly honest, it is also a redemptive journey back to music, with an emotional impact that transcends the rock documentary genre.

In the twilight of his days as a living legend, “Croz” has chosen living over the legend. He’s making less money but more music than ever, hitting the road in spite of serious health problems, surrounded by young players who have helped inspire a fresh and critically acclaimed creative streak of fresh songs, albums and performances. As a troubled talent and an uncompromising spirit whose voice has been harmoniously woven into the fabric of pop culture and music royalty since the mid-1960s (first with The Byrds but most famously as a founding member of the supergroup Crosby, Stills, Nash & Young), Crosby is a masterful raconteur and unsparingly self-aware survivor.

DAVID CROSBY: REMEMBER MY NAME explodes myths and sheds new light on the music, politics and personalities that have crossed this singular performer’s path.

Doc’n Roll are passionate about independent film and music across all genres, and celebrate music subcultures by providing a platform to support their cinematic expressions. They present their audience with the opportunity to watch these films as they were designed to be watched – LOUD.

They launched Doc’n Roll Film Fest in 2014 to finally show some love to the many excellent under-the-radar music films that are largely ignored by risk-averse film programmers. Post-screening Q&As, DJ sets and live music themed on the films add to the overall cinematic experience.

This film festival is taking place with the support of the BFI, awarding funds from The National Lottery.

About the BFI
The BFI is the lead body for film in the UK with the ambition to create a flourishing film environment in which innovation, opportunity and creativity can thrive by:
Connecting audiences to the widest choice of British and World cinema
Preserving and restoring the most significant film collection in the world for today and future generations
Championing emerging and world class film makers in the UK - investing in creative, distinctive and entertaining work
Promoting British film and talent to the world
Growing the next generation of filmmakers and audiences

The BFI is a Government arm’s-length body and distributor of Lottery funds for film. The BFI serves a public role which covers the cultural, creative and economic aspects of film in the UK. It delivers this role:
· As the UK-wide organisation for film, a charity core funded by Government
· By providing Lottery and Government funds for film across the UK
· By working with partners to advance the position of film in the UK.

Founded in 1933, the BFI is a registered charity governed by Royal Charter.

The BFI Board of Governors is chaired by Josh Berger CBE.