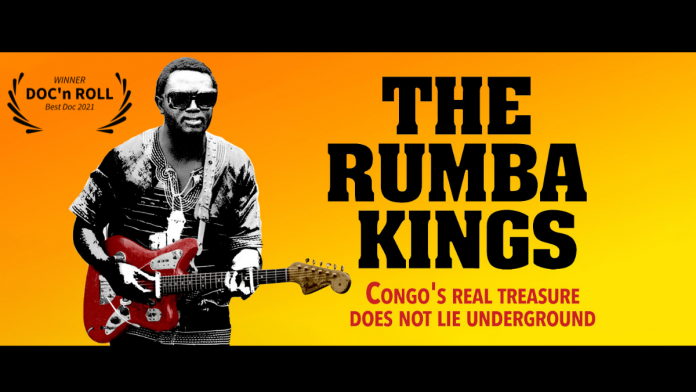 The seventh Doc’n Roll Jury Award for Documentary of the Year has gone to The Rumba Kings, directed by Alan Brain.

The announcement, made at the conclusion of Doc’n Roll’s 8th annual London festival, recognised the work of the team behind the documentary, and also honoured the unique cultural contribution of a generation of Congolese musicians who fused traditional African rhythms with Afro-Cuban music to create Congolese Rumba.

Also singled out by the jury for Special Merit was Love Yourself Today, a feature documentary directed by Ross Killeen that focuses on the music and vision of Irish singer-songwriter Damien Dempsey and members of his fan community.

“This year, our jury of music and film lovers faced the challenge of choosing the best of the best, with all six shortlisted films showing the real breadth and depth of the independent documentary films that celebrate scenes, stories, music and music-makers from around the world,” said Doc’n Roll founders Vanessa Lobón Garcia and Colm Forde. “The Rumba Kings is an unforgettable window on a fascinating musical story and a fitting winner of our annual award.”

Director Alan Brain, acknowledging the honour for The Rumba Kings, said: “On behalf of the team of musicians and experts from the Democratic Republic of the Congo, the Republic of the Congo and Angola, and the talented professionals from Peru, Argentina, United States and other countries, I’m thrilled to receive the Doc’n Roll Jury Award for Documentary of the Year 2021, and even more pleased considering the great films in competition.”

He added: “We are so happy that the film, and Congolese rumba and its story, connected with the amazing Doc’n Roll audience and jury. I was ten years old when I listened for the first time to a song by The Beatles, and I had to wait until I was 40 years old to listen to a Congolese rumba song by continental superstar Franco Luambo and his OK Jazz Orchestra. It is up to each one of us to build a world where every cultural expression has the respect, recognition and opportunity it deserves. As we say in Latin America, gracias totales (total thanks).”

Jury member, DJ and Jazz FM broadcaster Tony Minvielle commented: “This was a really insightful and diverse collection of films to judge, which made it all the more enjoyable. Love Yourself Today had me shedding a tear with its raw emotion and heartfelt compassion. It was a really healing watch.”

Minvielle added: “The Rumba Kings was a special one for me, with its story of the fusion of Afro-Cuban and Congolese rhythms – a subject given great respect and much love by its director Alan Brain. The film beautifully documented the social, cultural and political impact of this music and told its story with compassion, accuracy and detail. A film of ultimate beauty and joy.”

Fellow jury member Bengi Unsal, Head of Contemporary Music at Southbank Centre, said: “Love Yourself Today is not just a music documentary and it certainly is not just about Damien Dempsey and his Christmas concerts. It is a beautifully crafted portrayal of the times, the people and how music can have the ultimate healing effect and how it can change lives. I did not know much about Damien Dempsey before I watched this film, but I am forever moved by the stories of those he touched.”

Also shortlisted for the Doc’n Roll Jury Award for Documentary of the Year 2021 were the music documentaries Bury Us! A Punk Rock Uprising, directed by Andrew Nethery; Fanny: The Right To Rock, directed by Bobbi Jo Hart; Lydia Lunch - The War Is Never Over, directed by Beth B.; and The Nowhere Inn: St Vincent, directed by Bill Benz.