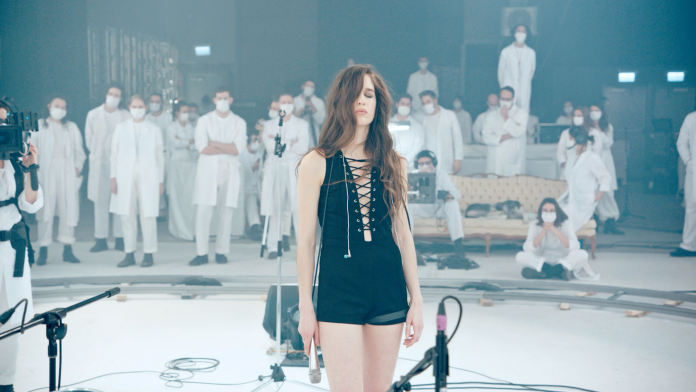 Envisioned as a laboratory experiment, the freeform concert was shot and directed by Quebecois filmmaker Denis Côté, who captured Marie Davidson and her new band L’Œil Nu’s first-ever performance.

"It is a refreshing novelty in my career to be approached to film such a freeform concert. For the concept, I imagined the performance as a laboratory experiment. Without completely turning my back on the festive aspects, I favored something a little colder, which leads to a certain purity of the act of watching a concert.”
- Denis Côté

"Renegade Breakdown Live is first and foremost a film, Denis Côté’s vision. Without ever directing us, he captured our first ever performance as a band, exploring the possibilities of what a filmed live show could be in 2021. Even if we are at the center of it, the surroundings, the crew, the audience, the gear and the mishaps are an equally important part of it, creating a unique document and experience for the viewer. The end result is as eerie and honest as it can get. »
- Marie Davidson & L’Œil Nu